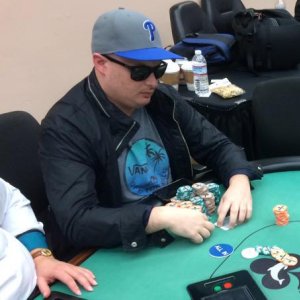 Wow. If you’re looking for a World Series of Poker tournament packed with talent, check out the $10,000 No Limit Hold’em Six-Max event, which is down to its final two tables. Nosebleed-stakes cash game player Doug WCGRiderPolk is atop the field with a stack of 1.4 million, one of two players who bagged seven-figures.

There are several brand name PocketFivers left. In fact, two former #1 playerscan be found in third and fourth: Paul paulgees81Volpe (pictured) and Fedor CrownUpGuy Holz, who have 896,000 and 841,000, respectively. Volpe has $5.1 million in career online tournament winnings and was last ranked #1 on PocketFives in 2011.

Volpe won a bracelet last yearin a $10,000 NL 2-7 Draw Lowball event and was the runner-up to Shaun Deebin a $10K PLHE event this year. Holz, who has deactivated his PocketFives profile, was ranked #1 on PocketFives in March. 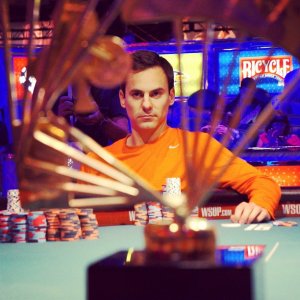 Chris SLOPPYKLOD Klodnicki (pictured) is in eighth. He has cashed for $2.5 million in online MTTs and will record his first in the money finish of the 2015 WSOP.

Two behind Klodnicki on the leaderboard is Olivier livb112Busquet, who made waves over the weekend after calling out Phil Hellmuth for thanking his sponsorsduring his bracelet acceptance speech. Then, an image of a smiling Busquet rocking Full Tilt gear surfaced, which put an end to much of the debate.

Finally, Mark AceSpadesRadoja is the short stack with 143,000 in chips. He’s a two-time bracelet winner with heads-upand shootout titles.

The tournament restarts at 2:00pm PT on Friday. Stay tuned to PocketFives for the latest WSOP coverage, brought to you by Tournament Poker Edge.