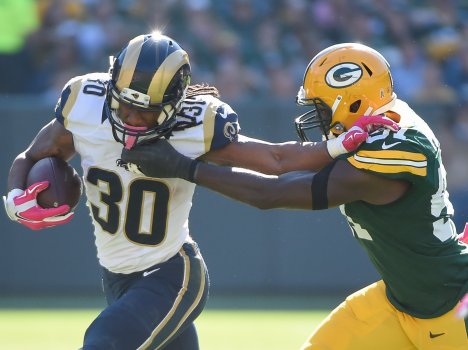 Watching the games Sunday, my friends and I will often throw out the phrase “mandatory own” or “prohibitive” regarding the top-scoring fantasy players. The idea is each week there are certain players who score so many fantasy points, a lineup simply must include them to have a chance to win a large-field tournament. In truth, we throw these terms around too loosely. Most weeks there are very few “mandatory” players needed to win a million; the magic required is actually just a complete, dud-free roster of high-scoring players.

Several players felt like “Mandatory Owns” this week without actually being necessitated. Todd Gurley was the most obvious, scoring 35 points for 67% of MillyMaker teams. Gurley is on the top 15 MillyMaker rosters this week, but there were ways to get around him having him. 6.5%-owned Danny Woodhead scored 33 points for $400 less.

Nate Washington felt prohibitive, 12x-ing his $3000 salary to 36.7 DraftKingspoints. Though he was the highest-scoring pass-catcher on DraftKings, Washington’s extremely-low ownership meant he wasn’t prohibitive. The roughly 2400 lineups that used Washington had a tremendous advantage, but then, there were only 2400 of them. This is a small enough number to overcome, as a couple thousand players could all have a significant blemish in their lineup.

There were no prohibitive QBs this week. Kirk Cousins was the highest scorer at the position, both in points and points per price. But I can’t find the 0.3%-owned Cousins in a top-50 lineup, though there are a bunch of Tom Bradys, plenty of Andrew Lucks, a smattering of Philip Rivers, a few Derek Carrs, a Carson Palmer, and a Cam Newton. QB scoring tends to be more uniform than the other positions; rarely does one QB outlie the field.

The only true “Mandatory Owns” are players who score significantly more points than anyone else at their respective positions. This week, there was only one actual mandatory own, Lamar Miller. The Dolphin scored a full six points more than second place Gurley and eight more than Woodhead. You could get away with inefficiencies at other positions, but you’re simply not going to make up a six-point deficit on 13% of the field (~44,300 players in this case).

DraftKings is running a $6 million prize pool Millionaire Maker for Week 8. $1 million will go to the winner. Sign up here.

The Rams defense was also pretty close to prohibitive. They weren’t exactly mandatory, as the Giants did score just three points less, but since the Rams were 28% owned (32% on DraftKings) and the Giants were just 2%, it made fading them almost impossible.

Defensive scoring is highly variant and largely unpredictable, which is why I believe we should never roster a defense in a large-field tournament that is going to be as highly-owned as the Rams. This particular time, the Rams happened to be the defense that outscored everyone else, but that will rarely be the case. We’re better off throwing darts (or making educated guesses) at lower-owned defenses to try to get an edge on a larger portion of the field. It worked out this time, but the Rams still only separated their owners from ~70% of the field.

We should also note that once again the Millies were won by RB/DEF stacks. Gurley/Rams was the chalkiest RB/DEF stack in DFS history, but yet another tournament-winning combo.

Unfortunately, FanDuel has us roster kickers instead of something that would actually be fun like a flex or second QB. While kickers are not entirely unpredictable – Stephen Gostkowski led the NFL in scoring the last three seasons – their week-to-week totals are so variant and matchup-irrelevant that rostering them in DFS is far more gambly than predictive.

This week, Blair Walsh – who actually missed an extra point – outscored second-place Gostkowski by seven points and everyone else by more. While I do still hope FanDuel will abolish kickers from their NFL contests, currently I merely hope kickers aren’t scrutinized in any legislative inquiries into DFS.

FanDuel has a $4 million NFL Sunday Million in the lobby for Week 8. Get in here.