Once again, the action will be intense on Saturday night over at DraftKings, where, as always, they are offering up MLB tourneys at every buy-in level imaginable. With a massive 11-game slate on Saturday night, we will make a slight departure and give multiple pitchers to target against and multiple lineups to consider.

For quick review, some of the guidelines we’d like to keep in mind when selecting a GPP squad are as follows:

– Pay for Pitching: Your starters are way more likely to perform to their typical level in a one-game sample than your hitters are. You can get a little cute at times on the mound with your SP#2, particularly in targeting a discount guy who can get strikeouts, but don’t get too crazy. I like a SP#2 this week who has been a bit under the radar this year, but is primed for a top effort Saturday night – more on that below.

– When choosing between hitters in a GPP, due to how strongly DK favors the power numbers in their tourney scoring, always favor a power hitter over a line drive/high average guy. A good high average hitter has a much lower ceiling in a daily format, and you need to reach some top floors to cash big.

– Stack, stack, stack: Each player in a lineup feeds off the production, or lack thereof, of those surrounding him in the lineup. Hitting isn’t contagious, but opportunity is. In a GPP, you will have to have a number of hitters go off, and a couple will need to go off in a huge way, so the best way to do this is by rostering four or five guys from the same lineup. As a rule, DK requires players from 3 separate teams on your hitting lineup, so go stack/pair/single to maximize upside.

– Pay serious attention to the lefty/righty splits; this is crucial. Avoid stacking from lineups with multiple lefties if possible, as those teams are easy prey for the lefty relief specialist. You will either lose your guy to a pinch hitter or be at a huge disadvantage in the lefty/lefty matchup. Find lineups facing a low strikeout pitcher, and preferably one who has a weak ratio of GB/FB.

Last week, we got back on the positive side of lineup variance in a huge way. We told you that the horrible Travis Wood was going to get gored by the Brew Crew; Wood and friends were torched to the tune of 3 HR, 12 Runs, and 11 Hits. Please make my commission out to KellyKip DFS LLC. 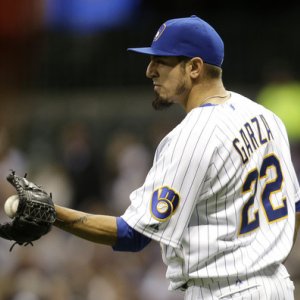 Now let’s get to Saturday Night!

Recommended SP#2: Matt Garza, Milwaukee at NYM. With King Felix dealing at home versus Boston, we only need to find Batman’s Robin. Garza has hit the wrong side of 30, and isn’t what he was at his peak. He’s consistently tightened up his game since mid-April and is coming off a beast of an effort against the free-swinging Cubs: 7IP, 3 hits, 9 strikeouts. His fastball is still topping 92, his GB/FB ratio is still solidly on the ground, and injuries have finally taken their toll on the Mets, who now sport what is basically a 4-man lineup.

Contrarian SP#2 Play: If you’re desperate for salary relief at SP#2, you can take the big gamble on DeLaRosa at Dodgers. Away from Coors, everyone’s mound stats perk up and DLR is topping 95 with the heat of the moment.

Stack/Attack#1: Reds at home vs Vogelsong. Rag-armed junk is what this relic offers, in addition to 2.2 HR/9 this year, and a 6.02 FIP. The launching pad in Cincy should be just that in this tilt. With multiple lineups having juicy matchups, salary cap considerations should determine how your puzzle pieces fit, but consider each hitter in the top 6 of the Reds order – Hamilton, Cozart, Votto, Frazier, the red hot Byrd, and Bruce – are all strongly in play. Jay Bruce’s price should be depressed enough to be considered a good value at this point.

Stack/Attack#2: Astros at home vs Estrada. A heavily fly ball pitcher who isn’t breaking 89 mph and is giving up close to 2 HR/9 this season, he should be in for a rude awakening here. Players looking at a good situation for the Stros include Marisnick, Altuve, Valbuena, Springer, Rasmus, Gattis, and Carter.

Stack/Attack#3: Blue Jays at Houston vs Feldman. Go ahead and set your MLB.TV preset right now to this game. Feldman is a high GB junkballer, yet he’s given up 6 HR in 43 IP in 2015. Whatever gets in the air gets in the bleachers. Jays in the spotlight here include Travis, Donaldson, Bautista, EE, and Pillar.

Stack/Attack#4: A’s at home vs Danks. A weak LHP against the organization that best exploits L/R matchups merits close inspection. Danks’ 2015 GB/FB ratio is 0.72 and Oakland puts it in the air more than any team in MLB. Don’t sleep on Crisp, Semien, Butler, Lawrie, or Canha. The obvious guy missing is Reddick, but his L/R splits show him to be a lefty that struggled to produce against southpaws. I’ll fade him and cross my fingers.

Best of luck to all those playing the DraftKings tourneys this weekend. Sign up for DraftKings here if you don’t already have an account.