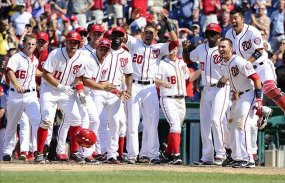 With a slate of eight games, Saturday night promises to offer some hefty tournament prizes over at the US-facing daily fantasy sports site DraftKings, where, as is the case every day of the season, they are offering up MLB tournaments at every buy-in level imaginable. So, it’s once again time to dig in to the offerings and see if we can bite into some juicy profit centers! Sign up for DraftKings here. US players are welcome.

In constructing your lineups, it greatly helps to have a plan: everyone should develop their own style, but it is helpful to keep some pretty universal truths close at hand as the backbone of your research. Some of the main truths I feel are vital are as follows:

– Pay For Pitching: Pay up for the knowledge that what you are getting is the closest to a sure thing DFS baseball has to offer. You can go heavy with two star hurlers or get a little fancy at SP2 with a guy who misses bats and projects to eat innings. I will not downgrade my SP in order to get a certain bat in my lineup.

– When picking your hitters in a GPP, always favor a power hitter over a line drive/high average guy. DK digs the long ball more than a lady of questionable repute does.

– Stack, stack, stack: We get to the boom or bust portion of our program here: we are playing a GPP and will need multiple big numbers from our hitters. When you stack, you are maximizing your odds of this, for when teammate #1 is on base four times, the teammate next in the order is set for a big night, as is the teammate below that, and so on. Hitting isn’t contagious, but production certainly is.

– Put the time in to study lefty/righty splits. You will find the time researching lefty/righty splits to be extremely rewarding. Few are the players who aren’t noticeably more productive against either a lefty or righty pitcher. Conversely, when you can locate a lefty strikeout arm who looks to be facing a lineup with multiple lefty hitters, you can mark him up as a man set to have a better night than the average line on the back of his baseball card. They do still make baseball cards, right?

Last week, we spotted vulnerable prey in the form of Wei-Yin Chen and pounced with the Red Sox stack. Eight innings, four hits, one walk, and five strikeouts later, we learned that Chen is strongly motivated by negative press on poker strategy sites. Hopefully, this week’s target is illiterate. Without further ado, on to Saturday night!

Once again this week, we have eight games starting at 7pm ET or later and as of press time, we have six left-handed starters of varying quality scheduled to toss. Finding a strong righty lineup against a mediocre lefty starter is one of the better angles. You get the weak armed SP and avoid the downside of the lefty relief specialist, who everyone seems to have – and these guys do miss bats.

I have no interest in loading up on the Royals lineup against David Price. Gio Gonzalez only does about one thing consistently, but that thing is keep the ball from being hit over the wall, so I will fade the Mets hitters.

Of the other lefties, the one I most want to pick on is Jon Niese versus the Washington lineup. Niese brings a 2.74 ERA into this matchup, but far more telling is his FIP of 4.98. He doesn’t strike guys out, he is getting taken deep despite an extreme GB/FB split of 4.64, and his fastball cannot break a pane of glass anymore. And now in steps the Nationals, with some interesting bats.

Looking over the rest of the Nats lineup, Ian Desmond is a dangerous #2 hitter, lefty Bryce Harper had a nearly identical OPS vs L/R in 2014 (rare for a lefty hitter), and Ryan Zimmerman is a very solid right-handed bat. We haven’t even gotten to the best part yet: Jayson Werth, he of the slow start and plummeting DFS salary, absolutely murders lefties, and Wilson Ramos’ stats against them are off-the-charts better than against righties. This is the definition of a lineup poised for a breakout night.

As a bonus pick, you will want to sprinkle in a couple of Reds versus the creampuff throwing Eric Stults. He is another lefty who cannot make a hitter miss and will get taken deep. Let salary cap room dictate who you might squeeze in there against this lightweight.

As always, keep an eye on the weather, as you don’t want a starting pitcher getting cut short due to delays, and best of luck to everyone attacking the juicy DraftKings Saturday night DFS schedule. Sign up for DraftKings here!