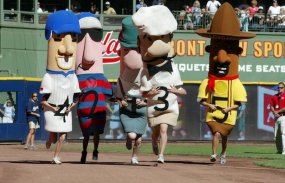 Once again, the action will be hot and heavy on Saturday night over at DraftKings, where they are offering up MLB tourneys at every buy-in level imaginable. One of the features is the 2015 MLB All Star Game VIP Experience tourney, where a mere $3 entry gets the winner an All Star Game trip including travel for two, game tickets, Home Run Derby tickets, and more. Let’s see if we can spot a lineup that might help you stand out from the crowd and help you grab head to the airport for the trip to beautiful… well, to Cincinnati.

Sign up for DraftKings here. The site accepts US players.

As a point of review, some of the guidelines we’d like to keep in mind when selecting a GPP squad are as follows:

– Pay for Pitching: Your starters are way more likely to perform to their typical level in a one game sample than your hitters are. You can get a little cute at times on the mound with your SP#2, particularly in targeting a discount guy who can get strikeouts, but don’t get too crazy. In a one game sample, variance is infinitely lower on the bump than at the dish.

– When choosing between hitters in a GPP, due to how strongly DK favors the power numbers in their tourney scoring, always favor a power hitter over a line drive/high average guy. A good high average hitter has a much lower ceiling in a daily format and you need to reach some top floors to cash big.

– Stack, stack, stack: Each player in a lineup feeds off the production, or lack thereof, of those surrounding him in the lineup. Hitting isn’t contagious, but opportunity is. In a GPP, you will have to have a number of hitters go off, and a couple will need to go off in a huge way, so the best way to do this is by rostering four or five guys from the same lineup.

– Pay serious attention to the lefty/righty splits; this is crucial. Avoid stacking from lineups with multiple lefties if possible, as those teams are easy prey for the lefty relief specialist. You will either lose your guy to a pinch hitter or be at a huge disadvantage in the lefty/lefty matchup. Find lineups facing a low strikeout pitcher, preferably one who has a weak ratio of GB/FB.

Last week, we picked on Jon Niese facing the Nats and for the second straight week, our target took it personally. A 1-0 Washington win isn’t what we were counting on when touting the big night the Nats lineup was in for. Well, since I never hit the Pick 3, we’re safe on the following prognostication.

This Saturday, we have a huge nine-game night slate. Looking over the matchups, it is obvious that the Dodgers will be targeted heavily; in facing a weak LHP in the Colorado launching pad, both Kershaw and the batting order will be pounded. As an overused group, the Dodgers lineup is an easy GPP fade.

Kershaw is the tougher question. On one hand, he can shut down anyone anywhere. On the other, he will be highly owned, and despite being an auto-plugin 99% of the time, a start in Colorado merits closer analysis. His career numbers in Coors? 15 starts, a 4.58 ERA, 1.28 WHIP, and .257 OBA. At the top salary and highest percentage owned, he is the easiest of GPP fades here. With guys like Cueto, Bumgarner, and Ross starting on the slate, the options are strong.

So, who do we want to roster on Saturday night? It’s the Brewers stack. The lineup is finally showing signs of life and in comes junkballer Travis Wood and the Cubs. Not only does ole Trav have a fastball that’s slower than Chapman’s curve, he also has a 0.93 GB/FB ratio and is allowing a fat 1.3 HR/9 innings. Use the extra dollars that others are wasting on Kershaw and stack your strong Brewcrewers.

The recently returned Carlos Gomez will be at the top of the order and Braun and the low salary Khris Davis are both more than capable of the massive night. Jean Segura as the table setter and run scoring beneficiary should be squeezed in. The surprise package could be Jason Rogers, who has been working himself into a platoon at first base with Lind. If he gets the starting nod here, he’s a must use at a very cheap price.

If you’re looking to round out your roster as remaining cap space allows, keep an eye on the Reds facing Rodon and the White Sox. Rodon is highly touted but very green, and the Todd Fraziers of the world tend to feast on fresh meat. The bottom line is if the Dodgers have an off night and Kershaw pitches to his career numbers at Coors, we are starting with a leg up against our tourney competition. While packing your luggage for Cincy, think about naming your first All Star hotdog after me.

Best of luck to all those playing the DraftKings tourneys this weekend. Sign up for DraftKings here.