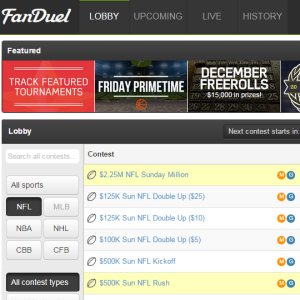 The top 20 finishers in Week 15’s tourney had teams that broke down as follows:
– All top 20 squads rostered Odell Beckham Jr.
– 16 of 20 owned Le’Veon Bell
– 17 of 20 owned Dez Bryant
– Only 2 QBs were represented, with Derek Anderson showing up on 14 of the top 20 and Eli Manning appearing on the other 6.
– Atlanta’s Harry Douglas appeared on 8 of the top 20 rosters.

In last week’s column, we recommended the following Targets, with less than desirable results:

On the other hand, our Fades were once again on the mark, having rejected the prospects of the Green Bay Packers offense, Joe Flacco, the Andy Dalton/AJ Green combo, Andre Williams, Doug Baldwin, and Ryan Mathews.

As in all large-field GPPs, in roster construction, we are looking to do the following:

QB – Josh McCown ($7,000): With ownership being high on the top QBs, Manziel owners taking another shot, and basement hunters on Clausen, McCown offers up a low percentage ownership play who is facing a soft pass defense in a game where his team projects to be chasing. Two high-quality WR pairing plays in Mike Evans ($7,900) and Vincent Jackson ($6,700) sweeten the pot.

RB – Jonathan Stewart ($6,200): Down $500 in price from last week, Stewart goes up against a Browns defense that has been generous to opposing RB and was gashed at home last week by Jeremy Hill. Can easily hit 3x value.

RB – Joique Bell ($7,300): Down $200 from last week’s tag, Joique figures to be the main recipient of the Bears’ horrific defense. Detroit may have no reason to air it out here and even with a lead, game flow plays into his hands. Roster with confidence.

WR – Doug Baldwin ($6,100): Dropping $200 from last week, Baldwin makes one of our lists for the third straight time. The image of Arizona’s toughness on opposing WR is not matched by the numbers; they are slightly below average in allowing WR fantasy points and Baldwin will be owned by very few. We zigged, then we zagged – this week we again zig and a TD would likely assure 3x value.

TE – Julius Thomas ($6,000): Coming in $200 lower than Week 15’s tag, Thomas is a second-off-the-layoff play facing a Cincy defense below average versus opposing TEs. A proven commodity at the always baffling TE spot with buy-low price tag is what we want to see.

QB – Matt Ryan ($8,700): With a price boost of $800 and with the prospect of tossing to a hobbled WR corps, this is the week to fade Senor Ice. The NO secondary is bad, the Saints are generous to opposing fantasy QBs, but hitting value at that price is far from a certainty. I’ll fade and find a better spot.

QB – Eli Manning ($7,700): Up $200 from the Washington gimme, don’t pay for last week’s numbers on a guy coming into St. Louis. No team, including Seattle, has been tougher on opposing QBs the past month. Thanks for last week, but we all know fantasy is a fickle friend. Eli who?

RB – Jeremy Hill($7,300): Will be a hot commodity off last week, but paying $200 more while going up against a tough Denver run defense is not a prime spot to find value. The Week 16 “If you missed the wedding, don’t show up for the funeral” fade.

WR – Odell Beckham ($9,000): The other half of the Eli anti-pairing. He can do no wrong, and can’t be covered. That’s why he’s $500 more expensive than last week. That’s why despite the raise, he’s still going to be owned en masse. That’s why we’re gonna watch him become what he actually is – a talented rookie in a bad matchup where he’s grossly overpriced – from the sidelines.

TE – Greg Olsen ($6,900): Up $200 in price and coming off of an excellent performance, Olsen now faces a Cleveland defense that has been stingy against opposing fantasy TE all year. Would need to produce more points in a game than he has in over two months to return required GPP value. Only thing more tilting than his mug is the 8.6 points next to his name on your rapidly sinking roster. No thanks.

As always, keep an eye on the injury reports (especially the RB situation in Dallas), as well as the weather updates, and best of luck to all those playing.

If you don’t have a FanDuel account, sign up through PocketFives by clicking hereand get a generous deposit bonus plus access to 5,000 one-day leagues each week! Plus, play in this week’s Sunday Million, which has a $2 million prize pool. Get started.