On Sunday, the World Poker Tour (WPT) will celebrate a milestone. The roving tournament series will air its 200th episode, which will feature action from the Hollywood Poker Open. The WPT was one of the original firing pins behind the modern poker boom and can currently be seen on Fox Sports Net, with new episodes airing on Sunday nights. PocketFives.com caught up with WPT host Mike Sexton to discuss the groundbreaking hour of television this Sunday.

PocketFives.com: Thanks for joining us. Can you share some of your favorite WPT memories from the last 200 episodes?

Mike Sexton: That first final table we had on the WPT is definitely one. We had a phenomenal final table, and the unknown was Gus Hansen, who became a huge star. It was just fantastic and the group has won eight or nine WPT titles combined. That show was amazing because Gus was the guy.

When we went back and edited that show, my eyes were popping out when I saw what Gus was betting with. Vince’s wife saw the first part of the show and knew right away it was going to be a hit. That first event was very special.

For me, it was exciting because it was my first time on TV. Bobby Baldwin, who was President of the WPT, and Lyle Berman were backstage. I didn’t realize the production team you had to have to put on a TV show. They took that show, edited it, and went and found a TV station. Those first five seasons were good for us, good for poker, and good for the Travel Channel. 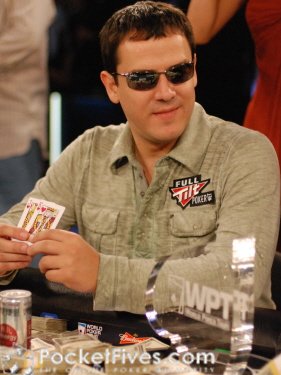 One of my favorite moments was when Doyle Brunson won the Legends of Poker. Another moment that was impressive was when Carlos Mortensen (pictured) won the Main Event of the WPT. He is the only guy to win the Main Events of the WSOP and WPT. That’s a feat we may never see duplicated again. I also liked making a final table this year.

PocketFives.com: Is it hard to believe that we’re sitting here talking about episode #200?

Mike Sexton: It really is. It’s been an amazing run and was very exciting from the get-go. To go one season nowadays is amazing. I can remember two years ago getting a special letter from the WPT congratulating me. It was our 179th show, which means we went past shows like “Seinfeld” and “I Love Lucy” in terms of the number of episodes. It’s all very amazing.

PocketFives.com: Do you have a favorite annual WPT stop?

Mike Sexton: I used to love to go to Paris in the early days when they were on the tour and we are going back there this September. Foxwoods was always special because I had success there as a player. This year, the Hard Rock down in Miami, a new event on the tour, was very exciting. The new stops are always fun. Of course, I am a Vegas guy too.

PocketFives.com: Can you talk about your reaction to Black Friday back in April?

Mike Sexton: I know what those guys are going through from when PartyPoker pulled out of the U.S. five years ago. PartyPoker was a very successful business and the #1 site in the world at the time. It pained us to leave the States. Public companies left the U.S. and private companies benefited and stayed. Now, unfortunately for them, they’ve had to stop.

My concern as a player is that I want to make sure players get their money back. It would be tragic for the players, the businesses, and poker in general if players didn’t get their money back. I’m one of those guys who believe that people should have freedom of choice. I’m in favor of online poker and home poker games, and I think it’s unfortunate how it’s all come about.

A year or two from now when they legalize and regulate online poker, it’ll be another growth explosion. Poker is going nowhere and there are more players playing than ever before. It’ll be interesting to see how it all unfolds online.

PocketFives.com: How is PartyPoker faring in the ever-changing global marketplace?

Mike Sexton: We’re expanding our global customer base now. With the WPT expanding more in Europe, we’re doing more WPT events over there. We’re hoping players overseas will play on PartyPoker and we hope it’ll come back to the U.S. PartyPoker is still a very powerful brand and certainly a name to be reckoned with. We’re proud of where it was.

PocketFives.com: You finished in second in a $1,500 Seven Card Stud High-Low Eight or Better tournament at this year’s World Series of Poker (WSOP) for $123,000. Were you pleased at how the 2011 WSOP went for you?

Mike Sexton: I played five or six events and made the money twice. You always want to win, but any time you can cash for $123,000, you can be happy. When you go back home and look at the check, you see it’s not too bad. If you can make over $100,000 as a player, you can’t mope about it. It’s been a satisfactory WSOP financially. A lot of people are going home not making any money, and that includes a lot of professional players.

Mike Sexton: I was. I’m a Hellmuth fan. I know he has a lot of antics, but the truth is he brings a lot of attention to himself and the poker world. He’s a very good guy. I don’t like his whining and crying, but overall I like him.