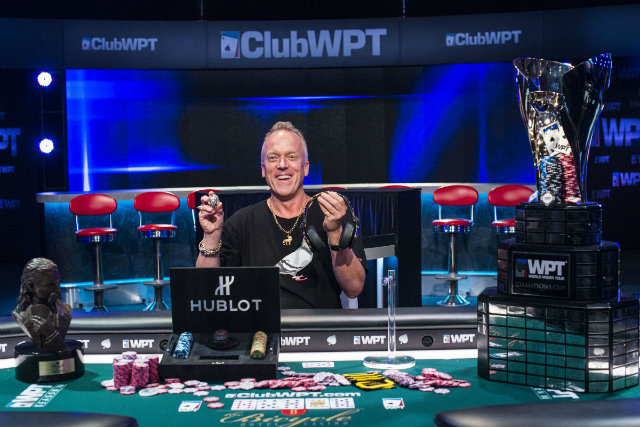 A professional poker player from Hillsborough, California, Lyons’ prediction came true, winning $615,346 and a seat into the 2017 WPT Tournament of Champions.

The final table was led by 77-year-old William Vo, hoping to pass Doyle Brunson as the oldest player to win a WPT title. Second in chips was Lyons, winner of the Arizona State Poker Championship for over $240,000 in August. A pair of 2015 WSOP bracelet winners – Upeshka De Silva and Benjamin Zamani – held down third and fourth place respectively. Todd Peterson and Rafael ‘Mahalael’ Oliveira rounded out the lineup, as they started with the following chips:

It was a short stay at the final table for Rafael Oliveira, eliminated on the seventh hand. Facing a limp from Benjamin Zamani and a raise from Upeshka De Silva, Oliveira looked down at

and moved his short stack all in. Zamani folded and De Silva called with

as De Silva made runner-runner trips to end Oliveira’s tournament.

Early action at the final table featured a couple of events one would find in a cash game. The players agreed to show one card every time they won a pot. When Pat Lyons wasn’t active with his table talk, he wandered away from the table for several hands at a time, even as the chip leader.

William Vo had the support of many spectators railing him at the Bike, but he couldn’t maintain his success from earlier in the tournament, finishing in fifth place. Vo lost a huge pot to Todd Peterson, attempting a huge bluff on the river with nine-high as Peterson eventually called, showing two pair. A few hands later, Vo attempted another bluff on the river, shoving with

board. Zamani called with

and his pair of jacks left Vo taking home a six-figure payday.

Finishing in fourth place was Peterson, knocked out in dramatic fashion by Lyons. The hand started with a raise from De Silva, a three-bet from Lyons and a four-bet shove from Peterson. De Silva folded and Lyons called with

, promising the crowd free drinks if he won the hand, as Peterson revealed

flop put Peterson in front with nothing changing on the

on the river gave Lyons the winning hand and a round of drinks for the spectators as three remained.

Upeshka De Silva was now the short stack and was in a good spot to double up, calling with

against Lyons’ shove with

as the river once again doomed a player as De Silva finished in third place.

Benjamin Zamani already had a runner-up finish earlier in the season at Choctaw, hoping to finish one spot higher but facing an over two-to-one chip deficit against Pat Lyons. Heads-up play lasted less than 20 hands when Zamani shoved with

as Lyons called with

, giving Lyons the winning straight and the title. Lyons also receives the WPT Champions Trophy, a Hublot King Power watch and a pair of gold Monster 24k headphones. Zamani settles once again for second place this season to take over the WPT Player of the Year lead with 2,000 points, 750 ahead of James Mackey.

The next stop for the WPT takes players to Atlantic City for the Borgata Poker Open. The $3,500 Main Event with a $3,000,000 guaranteed prize pool runs from September 18-23. On September 19th, the WPT Players Forum takes place at 8:30pm as players can provide feedback and suggestions.