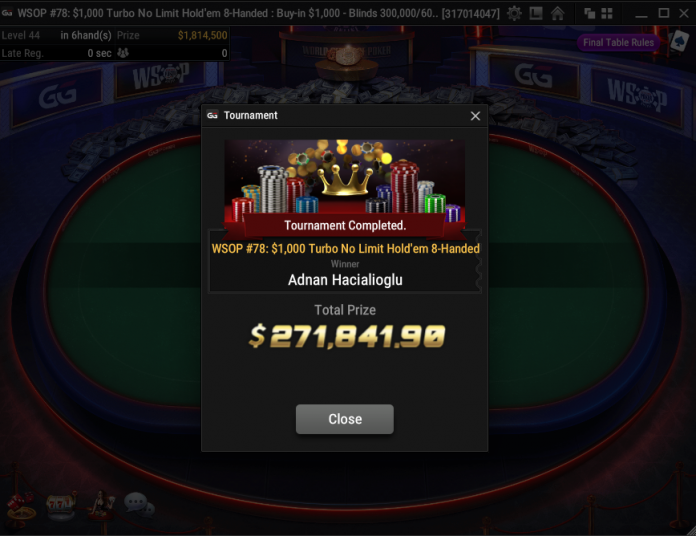 Adnan Hacialioglu needed just seven hours to go from cards in the air to bracelet winner as the Finnish pro made quick work of the final table in Sunday’s World Series of Poker Online action. Hacialioglu finished on top of the field that saw almost 2,000 players come out and for his efforts, he earned his first WSOP bracelet, $259,872, and a WSOP Europe Package.

The final table was supposed to be nine-handed, but after eliminations at both of the final two tables, the final table saw just eight players featured. Tuen Bui was the first of the eight to bow out. He moved all in from the button for over 2,800,000 with

, but in the big blind, Jargo Alavali woke up with pocket aces. The flop of

left Bui drawing thin. No miracles came for Bui, who took home $28,800 and change for his efforts.

On the next knockout hand, the action kicked off with Hacialioglu raising, and one of the big stacks at the time, Niko Koop, three-bet to 1,601,000. Soo Jo Kim moved all in for 3,232,456 next to act. Hacialioglu folded, but Koop called with

. He was in rough shape against the

of Kim, but Koop got new life after the

turn gave Koop the straight, and Kim wasn’t able to catch up on the river.

It was at this point that Hacialioglu took over, knocking out every player remaining from there. First, Andriy Lyubovetskiy bounced in sixth place. He moved all in from the small blind with

, and in the big blind, Hacialioglu called with

left Lyubovetskiy drawing thin, and Hacialioglu hit a full house on the turn to seal the hand. Lyubovetskiy took home for $54,713.88 for his efforts.

Jargo Alavali looked like he was going to double up next, getting his money in with pocket aces versus the

, giving him top pair and a straight draw. The

didn’t help, but the

Koop saw his stack slowly dwindle throughout the final table, and he eventually bowed out in fourth. He got his chips in ahead, with his

of Hacialioglu. Both players missed the flop, but the

on the turn shot Hacialioglu into the lead. He held that lead on the river, getting play down to just three handed.

Tim West started the final table as the short stack, but thanks to a number of double ups, he was able to get all the way up to third before busting. He lost a classic coin flip, holding

of Hacialioglu. The flop of

gave West outs for a broadway straight, but a five and two finished the board,  giving Hacialioglu a straight he didn’t even need.

Heads up play didn’t last long, as Hacialioglu started with a 3:1 chip lead over Robin Berggren. The last hand was another coin flip, as Berggren held

of Hacialioglu. The flop of

,  shot Hacialioglu the lead, and he never gave that lead up.

For his dominating performance, Hacialioglu earned $259,842, and his first WSOP bracelet.