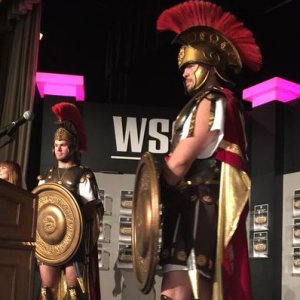 Throughout most of the weekend, PocketFives’ WSOP coveragewill be focused on the Colossus, the massive $565 buy-in tournament with a $5 million guarantee. Word on the street is that this tournament, which is assured the title of the largest live poker tournament ever held, could break 20,000 entrants.

After two-hour-plus pre-registration lines were reported on Thursday night, the scene was much more subdued on Friday morning. No line was reported at 7:00am and the tournament kicked off its first starting flight at 10:00am from the Rio in Las Vegas. Players began with 5,000 in chips.

Ben Yu, John Hennigan, and Dan Heimiller were the leaders very early on. One player was eliminated on the very first hand after flopping a set of kings. Rigged.

As of earlier in the day on Friday, there were only a handful of seats left for Flight D on Saturday. Anyone else who wanted to register for the Colossus would need to do so through one of the many late waves on Friday and Saturday. Around Noon PT, Kevin Mathers reported that Flight D had sold out and only late wave registration was available. There were 14,000 pre-registrations.

Players were seated across the Rio, from Buzio’s to the Poker Kitchen, and reportedly began play 10-handed with a goal of working down to nine-handed as quickly as possible.

According to PokerListings, there were 10,000 entries in Flights A and B combined. PocketFives was told that a final Flight A attendance number should be available around 6:00pm PT on Friday after late waves had ended. As of 2:00pm ET, Flight A had 5,300 entrants and rising.