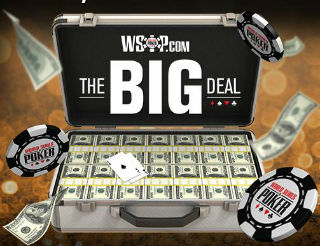 WSOP.com’s tournaments will never be mistaken for those at PokerStars, but then again, until the United States decides to get its metaphorical head out of the sand and actually join much of the international community in poker frivolity, they don’t have to. No matter, though, as WSOP.com has added a monthly capstone tourney, introducing the BIG Deal on the final Sunday of each month.

“We’re continuously having conversations with poker players. One theme that’s popped up multiple times is that some live tourney players can’t be bothered with $200 buy-in events,” said Bill Rini, Caesars Interactive Entertainment’s Head of Online Poker. “Even some of our online players have mentioned that they’ve really enjoyed the larger buy-in events we’ve run during the WSOP and wish we had bigger buy-in events the rest of the year. So, really, we’re just listening to our players.”

Players start with stacks of 10,000 chips and blind levels will increase every 20 minutes. Ten percent of the field will be paid.

The BIG Deal replaces the usual Sunday tournament with the same guaranteed prize pool, though there are a few differences. The current weekly Sunday major gives players just 5,000 chip starting stacks and the blind levels go up faster – every 15 minutes. And while the BIG Deal is more expensive – $500 versus $200 – it is also better value in terms of rake, as the entry fee makes up just 6.6 percent of the total price compared to 7.5 percent for the regular Sunday major.

To put it simply; we don’t know what the demand will be. Nobody is regularly running $500 buy-in tournaments online in NV or NJ so there’s no benchmark out there,” said Rini. “The buy-in is going to be too rich for some, while at the same time, there should be some new faces coming just for this. We’re just not sure what that mix will be at the moment.”

The other big difference is that the BIG Deal will be a re-entry tournament, whereas the tournament it is replacing is a freezeout.

Both states will host $5 super satellites every day at 6:15pm local time. There are also $50 satellites with five seats to the BIG Deal guaranteed; they will be held on Saturday on the last weekend of the month.

“Since this is something we’re hoping will be a regular event on the schedule, we’re not pushing it like we would a promotion,” said Rini. “While we are running some satellites you’re not going to see the calendar filled with satellites into this like we might do for a one-time promotional event.

This past weekend, the Nevada Sunday $20,000 guaranteed tournament fielded 130 entrants, creating a prize pool of $24,050. It paid down to 25 places. Over on the New Jersey site, 188 players registered for a prize pool of $34,780. There was a similar tournament at the same time on each site, the Winter Poker Classic Main Event that actually awarded a WSOP.com championship ring to the winner, so that might have skewed the weekly tourney numbers some, but the comparable weekly tournaments on the final Sunday of December actually had smaller turnouts. That could be a coincidence, or the Winter Poker Classic could have helped draw more players to the weekly (rather than the alternative of players choosing the Classic OVER the weekly).

“The reality is that we’ll run it as long as there’s strong enough demand for it. If players prefer the $200 event and the $500 doesn’t get much traction it’s possible that The BIG Deal won’t even run the full year,” said Rini. “On the other hand, if the $500 does well, we might consider running both the $200 and the $500 or we may expand the $500 to more than once a month.”