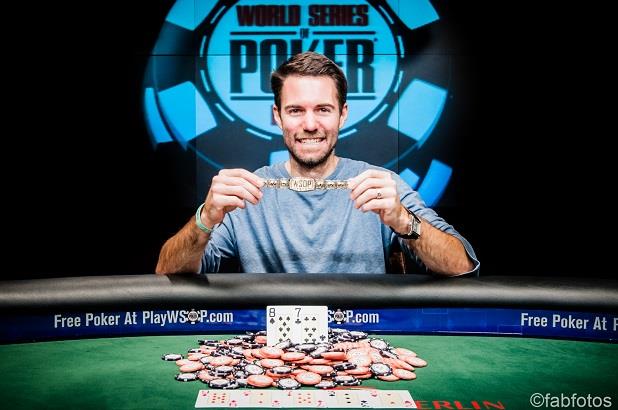 With just four live cashes to his name before WSOP Europe kicked off last week, it would be fair to say that a lot of people probably overlooked Alex ‘Komarolo22’ Komaromi before the final table of the €2,200 Eight Game Mix event began.

“It really means a lot. It’s like a dream to me. I started watching poker on TV with the World Series,” said Komaromi. “(It seemed) so far away. And now that I’ve achieved it, it’s great. I’m very happy.”

The final table began Wednesday with Komaromi and the former LAPT winner showed no mercy. He eliminated Jens Lakemeier in sixth place after just an hour of play. He then denied Shaun Deeb his second bracelet of 2015 by busting him in fifth.

Duhamel, also seeking his second bracelet of the year, was the only player sent to the rail by somebody other than Komaromi. Just before Day 2 wrapped up Duhamel found himself on the losing end of a Pot Limit Omaha pot with Clements and the 2012 WSOP Main Event champion was eliminated in fourth.

At that point the three remaining players bagged their chips for the night. Komaromi had nearly 50% of the chips in play and when play resumed Thursday afternoon he made quick work of his final two opponents. In just under one hour of play, Noah Bronstein was eliminated in third place and Clements was out in second.

Despite his dominance at the final table, Komaromi knew he was up against some of the best players in the world as the field began to dwindle.

“When there were eight or ten players left, they were all pretty much elite players,” said Komaromi “(It was) hard to take advantage of most of the spots. I tried my best. I think I did good, and I ran good.”

The next final table at WSOP Europe is the €3,250 No Limit Hold’em event on Friday.