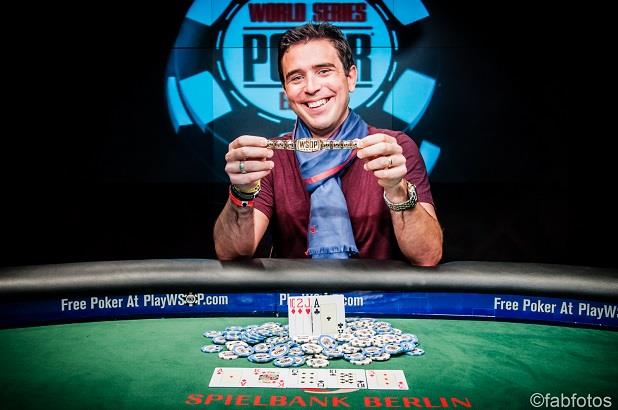 Richard ‘raconteur’ Grykosurvived a nearly 5 1/2 hour long heads-up battle with Mike ‘goleafsgoeh’ Leahto win the €3,250 Eight Max Pot Limit Omaha event at WSOP Europe and his first career bracelet Tuesday in Berlin. The win also came with a €126,345 ($143,793 US) payday. Like many first-time WSOP bracelet winners, Gryko was overwhelmed by what he had just accomplished.

“I haven’t really begun to process it, to be honest. All I can say is I’ve been a poker player since well before I should legally have been a poker player. So, a long time has been leading up to today,” said Gryko after his win. “The sight of the river card… I’ve never given a fist pump for winning a tournament before. That alone should tell you how much it means.”

The final table could easily be told as two stories. It took just over two hours to go from eight players to two. Ismael Bojang, making his fourth WSOP final table appearance this year, was the first elimination of the day, falling to Gryko just about 30 minutes into the start of the day. Max Pescatori, who started as the shortest stack, managed to avoid being the first one eliminated but couldn’t muster much more, falling in seventh at the hands of Mikkel Plum.

That’s when Leah went to work.

Leah eliminated the next four players in a little over an hour. Benjamin Pollak went out in sixth, Lawrence Lazar was eliminated in fifth, Roberto Romanello busted in fourth, and Plum was Leah’s final victim, going out in third place. That domination got Leah heads-up against Gryko with a 2-1 chip lead.

However, that would be as close as Leah got to bracelet number two.

Leah showed Ad 8d 8h 7h for two pair, but Gryko turned over Kc 9c 8s 4s for a rivered straight. After that hand, Gryko continued to chip away at Leah’s stack and eventually busted him just after 8:30pm local time.

Gryko has had most of his career success in his native England. In August, he won the United Kingdom Poker Championships Six-Max High-Roller for £30,000 ($46,887 US) and this is his third six-figure score but first since 2009 when he won a GUKPT event in Luton, England.

The next WSOP Europe final table is the €1,650 Monster Stack No Limit Hold’em event on Wednesday.