Saturday delivered more action from the 2019 World Series of Poker, including three more gold bracelet winners and a stacked final 11 in the $10,000 Dealer’s Choice. Here’s everything that went down on June 15 inside the Rio All-Suites Hotel & Casino, an update to the WSOP Player of the Year race, and a look at the schedule for Sunday.

Russian Roman Korenev earned his first WSOP gold bracelet and largest career live tournament score when he took down the $2,620 Marathon on Saturday in Las Vegas. Korenev finished atop the field of 1,083 entries to win the $477,401 first-place prize.

Korenev entered the final day in fourth chip position with six players remaining. American Jared Koppel was the big chip leader and the player Korenev ultimately got heads up with. Sticking true to the name of the event, the heads-up match between Korenev and Koppel was a grind. The two exchanged 12 double ups during the 219-hand duel, and the end of the match was an exciting one.

On the 415th hand of the final table, which was the 215th hand of heads-up play, Korenev doubled through Koppel with pocket tens versus

. Left with just 12 big blinds, Koppel doubled right back the next hand. After two raise-and-takes, Hand #419 of the final table saw the two get the money in on a

board. Korenev had turned top pair, top kicker, with the

. Koppel was the one at risk holding an inferior

. The river delivered the

to give Korenev two pair and the victory.

Five players returned on Saturday in Event #30: $1,000 Pot-Limit Omaha at the 2019 WSOP. Luis Zedan was the chip leader by a wide margin and he made quick work of his opponents. On the final day, Zedan busted three of his four competitors en route to winning his first career gold bracelet.

Thida Lin was the player Zedan faced off against in heads-up play, and she had the chance to become the first female winner of an open bracelet event in 2019. Zedan entered heads-up play with quite the chip lead and it proved insurmountable. He stretched the lead early and quickly sealed the deal to win the $236,673 first-place prize.

For Lin, the second-place score of $146,196 was the largest of her live poker career. It was her second WSOP cash and first WSOP final table.

The $1,000 Pot-Limit Omaha was another record-setting competition at the 2019 WSOP. The 1,526 entries the event drew proved the largest since the tournament became part of the schedule in 2014. The previous best was the turnout of 1,293 entries in 2015.

Campbell entered the third and final day in the bottom half of the counts with 17 players remaining. He was the chip leader when the final table of seven was reached and rode that chip lead to victory. Campbell has previously been close to a WSOP bracelet, included twice this summer with finishes in fifth place and eighth place already recorded. On the way to winning, Campbell had to contend with last year’s champion of this event, Hanh Tran, who ultimately finished seventh for $13,593.

Howard Mash is in the money for the second time at the 2019 WSOP, only this time he’s reached the final 19 players of Event #32: $1,000 Seniors No-Limit Hold’em Championship and is the chip leader entering Day 4. Mash finished Day 3 with 13.99 million in chips.

For Coral Springs, Florida, Mash has a handful of WSOP cashes, including two from the WSOP Main Event. This year, Mash finished in 2,428th place in the record-setting WSOP Big 50. To date, his career-best live tournament score if $49,335 and his largest WSOP cash is for $42,980. Mash was also the chip leader after Day 2 of this event. Now, just 18 players stand between Mash, his first WSOP gold bracelet, and $662,594 in first-place prize money.

Flack was the last player eliminated on Saturday, falling at the hands of Farhad Jamasi. On a flop of Qd9s2d, Flack got the money in with the JdTd for a combo draw. Jamasi had top set with the QsQc. The turn was the 2h to give Jamasi a full house, then the river completed the board with the 5s.

It was a long Day 2 on Saturday, with the field topping out at 122 entries, the money being reached, and just 11 players left standing, but it all sets up for an exciting finish to this prestigious tournament. Friedman is out in front, and he’s joined by Shaun Deeb, Matt Glantz, Nick Schulman, and Jeff Lisandro, among others.

Bonomo, Lichtenberger, and Bicknell Among 40 To Advance in $3,000 Shootout

Day 1 of Event #36: $3,000 No-Limit Hold’em Shootout took place on Saturday, with a field of 313 players spread out across 40 tables inside the Amazon Room at the Rio All-Suites Hotel & Casino. In the shootout format, one winner from each table advanced to the second round, and included in those 40 players to advance were Justin Bonomo, Andrew Lichtenberger, and Kristin Bicknell.

Up for grabs is a $207,193 top prize and the WSOP gold bracelet. All 40 players to have advanced to the second round have locked up at least $6,099. For Sunday’s second day of play, 10 four-handed tables will be in action, and the 10 winners will advance to Monday’s final table. Reaching the final 10 will earn a play no less than $12,937.

Among those to compete in this year’s $3,000 No-Limit Hold’em Shootout but who failed to advance were Phil Ivey, Daniel Negreanu, John Racener, Paul Volpe, Erik Seidel, Anthony Zinno, and Scott Clements.

Bracelet winner Sean Getzwiller bagged the Day 1b chip lead with 418,000, but he’ll still be trailing the 530,000 of Juan Esirviez from Day 1a. In fact, five players from Day 1a bagged a larger chip stack than Getzwiller did on Day 1b.

Daniel Zack, who pledged his push to win 2019 WSOP Player of the Year, remained atop the POY leaderboard after Saturday. Zack has 1,968.99 points and is still out in front of Scott Clements (1,642.02 points) and Daniel Strelitz (1,597.26 points), who round out the top three spots.

Zack did bag a Day 2 stack in the $1,000 Double Stack No-Limit Hold’em and could extend his lead with a deep run in that event starting with Sunday. Clements also bagged for Day 2, but with a much larger stack than Zack’s 52,200 in chips. Clements advanced to Day 2 of that event with 305,000 and is 35th overall.

Strelitz took a leap up from fifth place after finishing 14th in the $1,500 2-7 Triple Draw event.

WSOP Player of the Year Top 10 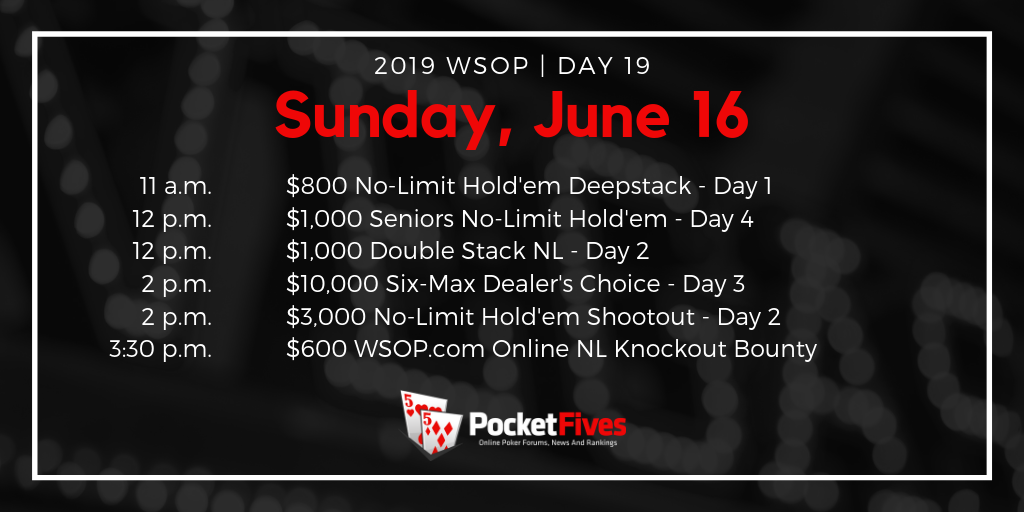