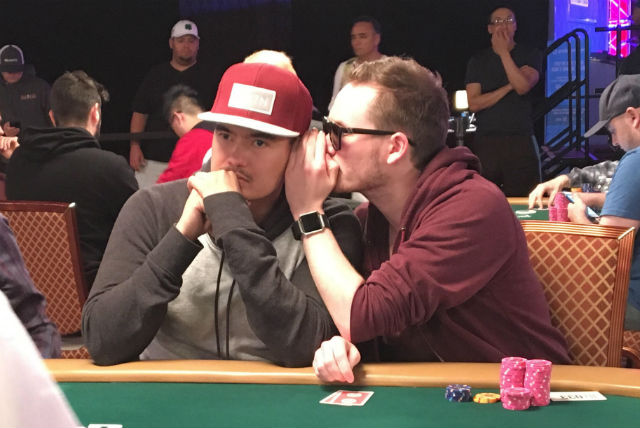 Just over three years ago, Steven Iglesias noticed that he was having trouble with the vision in his right eye. After seeing an eye doctor, he was told he had a rare genetic disorder called Leber’s Hereditary Optic Neuropathy (LHON). By the end of the year he was legally blind in both eyes.

“I can see shadows and lights and some movements, but I can’t use my vision. It’s super blurry,” said Iglesias. Leber’s most commonly affects males in their 20s. Iglesias was 25 when he was diagnosed.

As the money bubble burst in the $10,000 Six Max No Limit Hold’em Championship on Thursday night at the 2017 World Series of Poker, Iglesias was still in, fighting for his tournament life. It’s a pretty amazing feat when you consider that he gave up playing poker entirely not long after losing his eyesight. That all changed when Iglesias met his girlfriend and she introduced him to one of her friends, Daniel Christopher Grytten.

Even though he didn’t play poker at all when he first met Iglesias, Grytten eventually asked him to teach him how to play. Iglesias agreed and while teaching, started himself falling in love with poker again.

“I actually stopped playing for almost a year. I mostly played cash games, heads up, I didn’t play that that many tournaments,” said Iglesias. “After I lost my eye sight, Daniel asked me if I could teach him the game. So I started to coach him and then I got a passion for it again as a blind player. It’s a year ago I think, I started to play again, thanks to him.”

Throughout the $10,000 Six Max, Iglesias has had Grytten by his side, relaying basic information to Iglesias as hands play out.

“I look at the cards and whisper to him. When we play with friends, I say the action as well, but here they have professional dealers and they usually say the action,” said Grytten, 25. “So I just help with the chips and the chip counts. I don’t affect play in any way. He’s doing everything.”

Even though he’s not the one making the decisions, Grytten still wears sunglasses at the table to help limit any reads that players might be making.

“People have two people to look at now. Not just one. And I can’t control him. He has to control himself,” said Iglesias.

“I’m not used to playing live. I don’t want people to get any tells me from me. So I try and stay as calm as possible,” said Grytten.

They’re only in Las Vegas until July 1 and Iglesias plans to play as many No Limit Hold’em events as possible until then. He’d stick around and play the Main Event, but a family trip to Italy is already booked. So when he looked at the 2017 WSOP schedule, he picked out the $10,000 Six Max and knew full well he’d be entering one of the toughest No Limit fields of the summer.

“i wanted to challenge myself against good competition. I really believe in my poker skills. I’ve been studying the game for nine years. The competition here is sick. It’s really good,” said Iglesias. “I don’t think I have an edge but I think I can play just as good as some of the best. Even though I don’t have any results yet to prove it. But I think I will in the future.”

Iglesias does have some smaller live cashes to his credit, but this is his first trip to the WSOP. While some might consider Iglesias’ condition to be a detriment to his game, the 27 year old couldn’t disagree more.

“I’m actually a much better player now than before I think, because I have a much healthier lifestyle. I take better care of myself so I’m more focused and I use more time on studying the game,” said Iglesias. “I took some coaching and I actually think my memory is better now than when I had my eye sight. When you lose your eyesight your memory becomes really important. You have to remember everything – like where you put things – and when you play a lot of poker, memory is important too.”

Poker players know that some times they need a little luck to get deep or even win a tournament. Iglesias though is hoping to use his “one time” for something much more important. He has just 1% of his vision now, but that could all change.

“It’s been the same now since 2014, but hopefully it can heal. Some people with the same disease have perfect eyesight after five years or something. So if I’m lucky, I can get my eye sight back.”