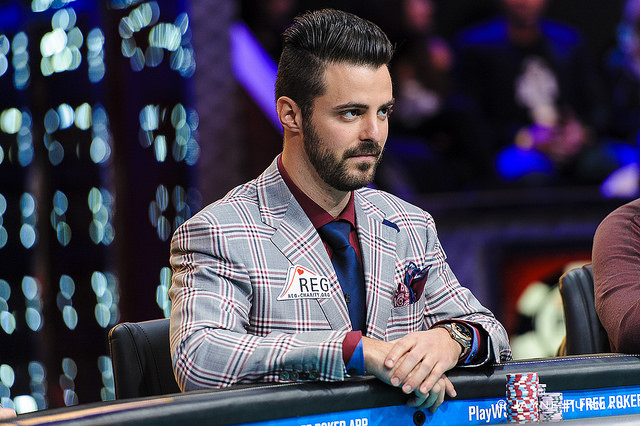 Max Steinberg came into the 2015 WSOP Main Event final table with the fourth biggest stack, but struggled on Sunday night and with just six players left on Monday, he was still fourth, but actually had fewer chips than when he started play.

Steinberg’s Monday roller-coaster got off to a bit of a rocky start, but was saved by a fortunate flop. Thomas Cannuli raised to 1,400,000 from UTG with Ac As and Steinberg moved all-in over the top with Td Th. Cannuli called and then watched in horror as the flop came Jc Ts 6c to give Steinberg a set. The Qd turn and 8s river kept Steinberg in front, eliminated Cannuli, and propelled Steinberg to 31,225,000.

Not long after that hand, Steinberg tangled with chip leader Joe McKeehen and came out on the winning end. Steinberg raised to 1,600,000 with Ac Ks and McKeehen called with Kh Qh. The flop came 6c 6s 4d, Steinberg bet 1,900,000, and McKeehen folded.

The first decent size pot that didn’t go Steinberg’s way on Monday came in a hand with Josh Beckley. The action folded to Beckley in the small blind and he raised to 1,900,000 with Js 6d. Steinberg called from the big blind with 4d 2d and then called Beckley’s 2,100,000 bet after the Qd Jd 6s flop. The Ts turn produced a 3,800,000 bet from Beckley and a call from Steinberg. The Jh river missed Steinberg’s flush draw and filled Beckley’s full house. Beckley bet 10,100,000, forcing Steinberg to fold, leaving him with 23,250,000.

Steinberg failed to get any real traction and a failed bluff against Neil Blumenfield spelled the beginning of his demise. Holding Qd Qh, Blumenfield raised to 1,900,000 from UTG and Steinberg re-raised to 5,000,000 from the big blind with 3s 2c. Blumenfield called to see a flop of Th 8d 3d. Steinberg checked, Blumenfield bet 4,000,000, and after a long time to consider his options, Steinberg folded and was left with 18,250,000.

A few minutes later, Steinberg’s run was over and it was none other than chip leader McKeehen who did the honors. McKeehen raised to 2,000,000 from UTG with Ad Qc and Steinberg moved all-in for 16,500,000 with Ah Jd. McKeehen called and the board ran out 9d 7c 5s 8c 3d to eliminate Steinberg in fourth place and end play for the night.