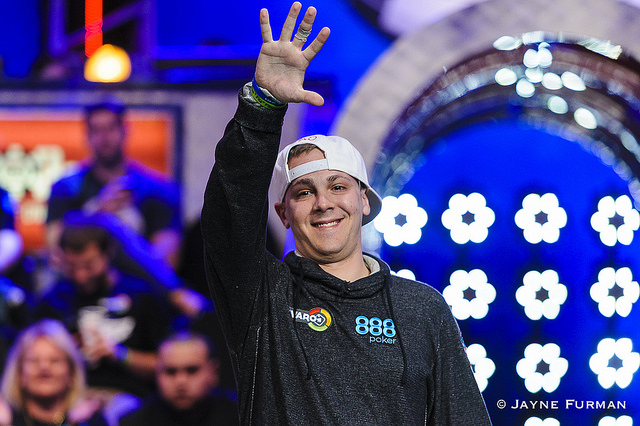 Early in Sunday’s opening session of the 2015 WSOP Main Event final table, Pierre Neuville, who was eliminated in 7th place, folded pocket tens pre-flop after Neil Blumenfield put in a sizable three-bet while holding pocket aces. Those two hands ran into each other early in Monday’s session of the World Series of Poker Main Eventfinal table, with Tom Cannuli going from a big favorite to double, to out in the matter of one untimely flop.

After a slightly uneventful first night of November Nine play, Cannuli returned for Monday’s restart as the shortest stack with just over 17 big blinds to his name. On the second hand of the night, Cannuli got that short stack in the middle after he opened from UTG to 1,400,000. The table folded around to the big blind, where Max Steinberg moved all-in. He had Cannuli well covered and the New Jersey native wasted no time getting his chips in the middle before he turned over As Ac.

Steinberg, who started the night with 16,000,000 chips, was drawing to just two outs, as he held Td Th. One of those two outs arrived when a Jc Ts 6c flop fell, turning the tables on the short stack, as he was then left drawing to two outs to save his tournament life. The Qd brought some additional equity for Cannuli on the turn, but after the 8s completed the board, he was eliminated in 6th place.

Cannuli earned $1,426,283 for his finish and, for the second session in a row, a player was eliminated from the final table on just the second hand of the night. After the knockout, the first of the final table that wasn’t scored by chip leader Joe McKeehen, Steinberg was sitting behind over 31,000,000, good for an over 50 big blind stack and neck-and-neck for second place on the final table leaderboard.