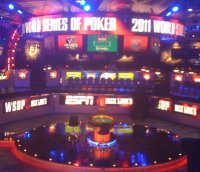 It’s been a fast and furious sea of bustouts on Day 8 of the 2011 World Series of Poker Main Event. What started as a field of 22 today has already been cut to 14. WSOP officials have told PocketFives.com that they willhalt play with 14 remaining until 4:30pm PT. Then, the cards would fly for two hours until the scheduled dinner break at 6:30pm PT.

ESPN’s Andrew Feldman has been among those relaying information about the schedule change to those in attendance and watching at home. Feldman Tweeted, “Seriously, seven eliminations in the first two hours of Day 8.” He added that seats were filling up fast in the Thunderdome: “The arena is starting to fill up. If you’re in Vegas, come on down, it’s free to watch. Or, turn on your computer or TV. That works too.”

Andrey Pateychukdropping a race with A-Q against the pocket jacks of Pius Heinz marked the eighth elimination of the day, pausing the tournament with 14 players remaining. 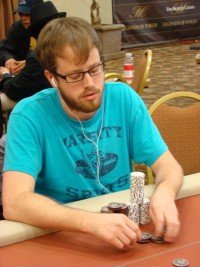 One-time chip leader Ryan Lenaghan(pictured) was the ousted from the Main Event. He 3bet all-in before the flop with A-8 of hearts and received a taker in Samuel Holden, who called with A-Q of spades. The flop came 2-7-6 with two spades, giving Holden a flush draw, and it promptly hit on the turn when the eight of the suit fell. Lenaghan was drawing dead to the river and found the door in 16th place for $378,000.

Barnhart took down the WSOP Circuit Championship at Harrah’s Tunica for nearly $150,000 earlier this year, which qualified him for the Circuit National Championship freeroll in Las Vegas just prior to the 2011 WSOP. Barnhart won the $1 million invite-only event for $300,000 and a gold bracelet. He’s at well over $800,000 in earnings this year from live poker tournaments.

We’ll keep you posted on the latest from the 2011 WSOP Main Event right here on PocketFives.com. Our WSOP coverage is made possible by 24hPoker.