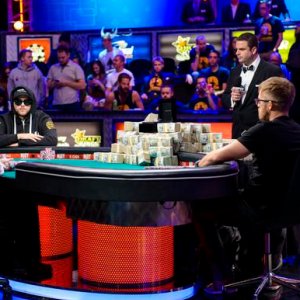 Once again next year, the World Series of Poker Main Event will carry a $10 million guaranteed first place prize. First making an appearance this year, the eight-figure guaranteed payday for first place helped draw in 6,683 entrants, with Sweden’s Martin Jacobson taking down the title proudly draped in a flag from his home country.

WSOP Tournament Director Jack Effel took to Twitter on Friday to thank players for their feedback on the preliminary 2015 WSOP schedule, which was released earlier this week. In response, he was met with a bevy of payout suggestions about the Main Event, several questioning the need to guarantee $10 million to first.

“Everybody loves the $500 and the MM, everybody hates the $10m GTD first place. Listen to your customers. You’re above gimmicks,” wrote Eric jakz101pokerCrain. David Davidp18 Peters added, “1/6 going to 1st in this big of field is absolutely insane. Payouts in MTTs are way too top-heavy as it is, don’t make it worse.” Last year, the tournament had a $62 million prize pool, with $10 million, or 16%, going to Jacobson. Here is the Tweet from Effel:

Nice (& thx) to see all the feedback so far regarding some of the new additions for 2015. Hope everyone is having a great holiday season too

Justin looshlePechie also weighed in on Twitter, opining, “Flatter payouts are better for poker IMO. 1/6 of money to one person in a 6k field will be looked back as absurd in 10 years.” David “ODB” Baker added, “If you guys don’t deliver the numbers, we as players suffer. Not worth a few extra potential bodies.”

Last year, Jacobson and Felix Stephensen played heads-up for $5 million in real money in the Main Event, as the latter ultimately earned $5.1 million for second place. With such a disparity between the first and second place payouts, former WSOP Main Event champion Ryan Riess Tweeted:

By not facilitating chops and setting up the final two players to play heads up for piles, a lot of legal problems can and will occur.

Also up for debate was the number of places to pay in the Main Event. Last year, almost 700 people finished in the money, or about 10% of the field, with a minimum payout of $18,000. “In order to get 2x at bottom, there’s no good way to pay 1k places without a large field,” said Effel.

Well leave the final word on this topic to Poker Hall of Famer Daniel Negreanu, who Tweeted, “I agree strongly that flatter payouts are more important than guaranteeing a $10 million 1st prize. Increasing the chances of cashing increases the chance that recreational players will play not only this year, but also in future years.” Phil Hellmuth agreed. Negreanu added:

I see no evidence that a $10 mill first prize does anything to attract more players. Having more people leave a winner would IMO