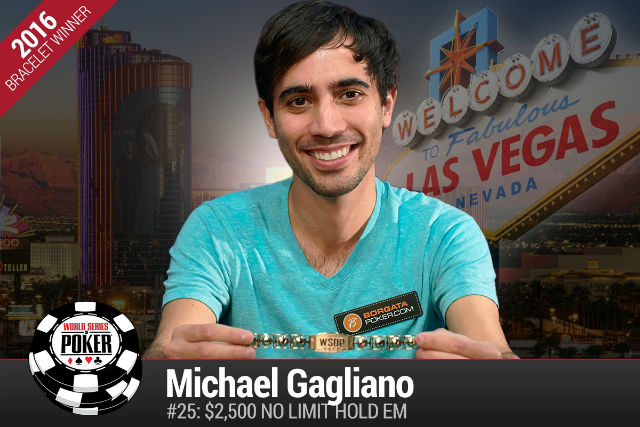 Tonight in Hunterdon County, New Jersey Michael ‘Gags30’ Gagliano will be sitting with his feet up, watching his nearly three-year-old daughter run around the house after her busy day at the preschool she just started.

Two weeks ago though, things were quite a bit different for the 31-year-old poker pro. Gagliano was in Las Vegas, heads-up for a bracelet at the 2016 World Series of Poker against Daniel Cooke in the $2,500 No Limit Hold’em event.

Gagliano knew he had to win.

“I got heads up against a guy that was definitely an amateur and I don’t think he’s played much heads-up before in his life. So when it was even, it was my tournament to lose,” said Gagliano. “Beating someone like that, that I’m expected to beat is more of a relief winning than a celebration, which is a weird thing to say.”

That’s not to say that Cooke didn’t do his best to cause Gagliano, one of the most highly respected New Jersey grinders going, a level of discomfort and confusion though.

“Heads-up was the most interesting I think because, like I said he was definitely a recreational player, and he was playing really tight the whole tournament, and he started heads-up by playing really tight and then five or six hands he double-barrelled me, I folded and he showed me this jack-four off, no equity bluff,” said Gagliano “And he just showed it, which I thought was strange too and it’s like he was saying ‘Okay, I’m going to play. I’m not here to just fold. You can’t run me over’.”

From that point on Cooke was a different player and it forced Gagliano to make some adjustments of his own.

“He totally changed his strategy after that and went bananas. He started raising every hand and he started raising really big, shoving 40 big blinds. I would just raise for the minimum and he would just shove 40 big blinds,” said Gagliano. “And that’s really frustrating to deal with especially when I know I’m going to have a skill edge because he’s just going to make me just gamble for the bracelet, which is honestly a good strategy for him. I obviously didn’t want to do that, so I started playing smaller pots, I did a lot more limping and stuff like that and getting him post flop.”

Gagliano eventually got the better of Cooke and found himself posing for pictures with the WSOP bracelet, the first of his career and surprisingly the first live win of his career.

“That’s definitely the biggest thing for me. I’ve made a number of fairly big final tables. I have two seconds in pretty big tournaments, I have a third at Borgata. I have another second in a smaller daily tournament,” said Gagliano. “Just a bunch of really close calls in live tournaments and never got a win, so it feels good to get that out of the way. I don’t think it’s quite even sunk in that it’s a WSOP bracelet or how big the win was money-wise.”

For the record, Gagliano won $448,463, the biggest score of his career by almost $280,000, but it was the outpouring of support and congratulations from other players, long time grinders like himself, that hit home for Gagliano.

“I mean, it means a ton. Every time I tweeted anything at the final table, I had so many people wishing me luck and liking the tweet and saying I can do it and that kind of thing. I was super short on Day 3, I was super short basically the entire tournament, and people were still like you got this, just hang in there, you can do it. It’s just pretty cool having so many people rooting for you from literally all over the world,” said Gagliano. “It’s definitely special that it’s the WSOP. I can tell because of how many people have messaged me and told me congratulations and people that I hadn’t heard from in so long that were like ‘dude, I heard you won, Im so excited’. So it’s definitely a little bit more special than other stuff and it will get more special as time goes on.”

Gagliano is back home in New Jersey for a quick break before heading back out for the duration next week. While home he gets to spend time with his daughter, play online and refresh a little bit for what he’s hoping will be another deep run or even a second bracelet. While he’s in Las Vegas his wife Megan and daughter stay out east and that’s something Gagliano struggles with, even if the poker keeps him distracted.

“She just started her preschool,” said Gagliano. “It’s definitely hard being away, it’s just hard. It is what it is. I play poker all day long when I’m out here so the days go by fast.”