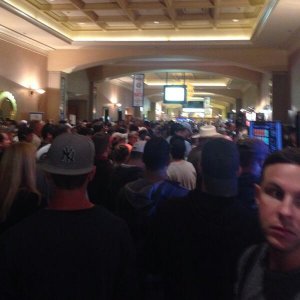 One of the largest tournaments in the history of the World Series of Poker began on Thursday, as a $1,500 No Limit Hold’em Monster Stack drew 7,862 entrants. Two flights occurred during the day, the first attracting 4,020 players, the most the Rio could handle at one time. The second flight drew nearly the same number of bodies, meaning first place will take home $1.3 million, nearly 900 times the buy-in.

A total of 1,941 players from Flight A of the Monster Stack moved onto Day 2 on Friday, which begins at 3:00pm local time. It’s unclear how many players from Flight B advanced, but players were looking at the tournament as a potential tune-up for the Main Event, which starts next week. Take Jeff Gross, for example, who Tweeted, “Up over 30K in #wsop51 monster stack tourney… Started at 11pm tonight, this feels like a good warm-up for the Main!”

To give you a little taste of the mayhem that was the second flight of the day, coverage on WSOP.com noted, “The 5pm second flight quickly filled up and some of the ‘Day 1b first wave’ registrants had to wait nearly three hours before they were seated for play. Four more ‘waves’ for seating players were planned, but ultimately the large majority seemed to have to wait until the start of level six to be able to play some poker.” Registration closed just before 11:00pm local time. 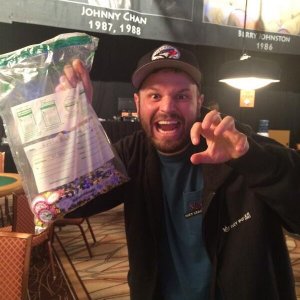 PocketFivers were Tweeting about the tournament, several of whom started quite late, but still managed to move on to Day 2. Falling under that banner was Randy nanonokoLew, who Tweeted, “Only played for 4 hours today, but made Day 2 of the Monster stack! Got 28,300.” Revealing his experience of reaching Day 2 was former skateboarder Darryll DFish Fish, who Tweeted, “Bagging 21k after a day of mostly folding in the #monsterstack.”

Two-time bracelet winner John Monnette is the chip leader in the Monster Stack event after Day 1 with 152,000. Incredibly, two former #1 ranked playerson PocketFives cracked the top 10 of the large-field tournament: Jordan Jymaster0011Young and Griffin Flush_Entity Benger (pictured), who bagged the sixth and tenth largest chip stacks on Thursday, respectively. Here are the top 10 stacks, according to WSOP.com:

Stay tuned to PocketFives for the latest WSOP news, sponsored by Real Gaming, a regulated online poker site in Nevada.