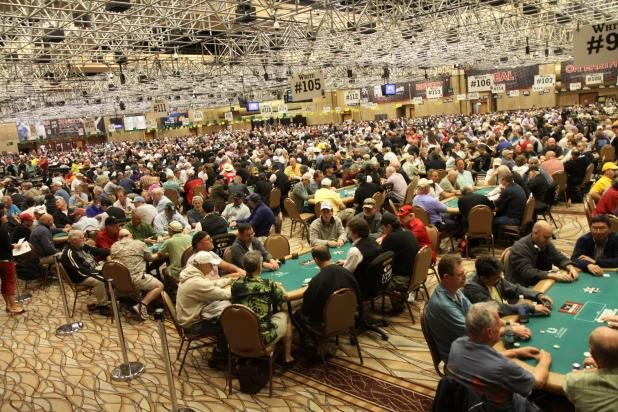 On Thursday, World Series of Poker (WSOP) Executive Director Ty Stewart and Tournament Director Jack Effel hopped on Twitch for a special town hall meeting. It was two dudes sitting in a room going through PowerPoint, but plenty of changes, ideas, and feedback were discussed. Now, on to the highlights of the broadcast, which received about 250 concurrent viewers at its peak.

The 2016 WSOP runs from May 31 to July 18, meaning the entire 68 bracelet event-series begins in four short months. “Before anything is set in stone, we’re asking for that last call for feedback to make 2016 the very best year for the WSOP yet,” Stewart told viewers. The full 2016 WSOP schedule will be released around Valentine’s Day.

The first subject discussed was the length and timing of each playing day. Stewart and Effel tossed around the idea of starting play at 10am or 11am, shortening the breaks between levels, and playing 10.5 levels on Day 2 and beyond, all in an effort to shorten tournaments and make the most efficient use of a player’s time.

“We want to have as many players as possible come to the WSOP, particularly the new and recreational players,” Stewart explained. “Time is the #1 consideration for players when they’re planning to come to the World Series… We believe a three-day format is right, about 30-something hours of play. We’ll be able to finish those final tables on Day 3 in a better fashion.”

Staffing issues and burnt out players plagued the 2015 WSOP due to long days. Part of the problem had to do with starting with 5X chip stacks, but no changes will be made in that department. Instead, adjustments will likely be made to the blind structure, and a variety of solutions were tossed around.

For those players who survive the grueling WSOP schedule, payouts are a concern, especially in the Colossus. “There was a big outcry to increase the number of places paid [last year], so we did that,” Effel said. “We are hard at work with some really good consultants… to refine and make the payouts better, smoother, but the idea of paying more places – it resonates with us for sure.” Paying more spots, however, must be balanced with a meaningful top prize.

Also discussed was the size of a “mini-cash,” a payout that’s more than the buy-in, but less than a true min-cash. “The feedback seemed pretty good for that,” Stewart explained, “[but] what do you believe the floor is for an ROI in a mini-cash?”

A new jumbo index playing card was used at WSOP Europe with few complaints. “We believe this new size, this new thickness is giving us a much better card than we had in the past, one we can be proud to have on the table,” Stewart said, saying that WSOP officials will experiment with various permutations during the ongoing Circuit.

On to the Colossus, which drew over 22,000 entrants last year and brought 5,500 first-timers to the WSOP. Colossus II, on the docket for 2016, will have a $1 million first place prize, three starting days, and each flight will play into the money. Anyone who busts out during a flight while the flight is in the money can cash out and re-enter, meaning players can cash up to six times.

“Because we are going to be paying a precise percentage of the field, it doesn’t matter if you pay out all of the guys on Day 1 or Day 2, the payouts for those respective positions and the equity will be relatively the same,” Effel relayed. All Day 2 cashes will be more than any cash on Day 1 and the bubble should burst about three-quarters of the way into Day 1.

“We have spent more time on the Colossus than anything else, trying to solve all of the major complaints,” Stewart admitted.


Given that players can take part in multiple Colossus flights, cheating by introducing chips into other flights could occur. “The chips and the value of the chips in each flight are the same,” Effel evaluated. “You always have the risk of someone taking the chips and putting them into another tournament.”

WSOP organizers plan to take precautions and would perma-ban anyone who tries to sneak chips into another tournament or flight. “I feel pretty good that the controls in place will protect us in the long-run,” Effel said.

Also coming up, as it does every year, was why the WSOP does not facilitate chops. You can chop to your heart’s content online, so why not be able to do so at the Rio in Las Vegas? “That is a business decision on our part,” Effel said. “We, as a company, recognize the player for their participation… From our tax consultant and our accounting team and our legal team, we have been advised not to get involved with the personal business of the players.” WSOP paid out 11,638 players last year in bracelet events.

The November Nine will return in 2016, only it’ll take on a slightly different schedule this year. The final table of the Main Event will play out from Sunday, October 30 to Tuesday, November 1 on ESPN. One week later on November 8, the United States will elect its next president.


“The online bracelet is back,” Stewart said. “Certainly, we’d like to see the numbers go higher… We genuinely believe it was successful [last year] and is something we can build upon.” There were 905 entrants in the $1,000 online bracelet event last year. WSOP officials also want to come up with ways to reward players who played online and are dreaming up how to do so.

Unsurprisingly, the poker world is still buzzing about the slow-paced play during the 2015 November Nine when players tanked over remedial decisions.

“When we get the most criticism on shot clocks is during the Main Event final table broadcast,” Stewart said. “I understand it’s not the greatest television sometimes… At the same time, we are very understanding that there’s so much life-changing money on the line… I don’t want television to artificially change the nature of the play and the nature of the game and so I’m not going to let television be the driving factor… We are not, for this year, planning to implement any sort of shot clock.”

Although one segment of Caesars is embroiled in bankruptcy, there are no plans to increase the rake at the 2016 WSOP. Sorry, players.

Live-streaming is on deck once again for the 2016 WSOP. The question is on what platform. Stewart said Twitch is a possibility, but added, “ESPN owns the rights to broadcast the WSOP. If they decide not to broadcast an event, then we have the ability to broadcast that event, but only on our own website… At the present day, [the WSOP] would not be able to be on Twitch. That being said, we are interested in modifying our relationship so that would be possible.”

After PokerNews and the WSOP parted ways prior to last year’s events, some were critical of WSOP’s in-house reporting team. “We did get some bumps and bruises last year about our live reporting aptitude,” Stewart admitted. “This is a free service that we’re providing, a very costly service… This is still a business, so we have invested, we have hired a couple new staffers, and we’re going to hold ourselves accountable at doing a very good job.”

Getting Ghoulish With The 888poker Ambassadors