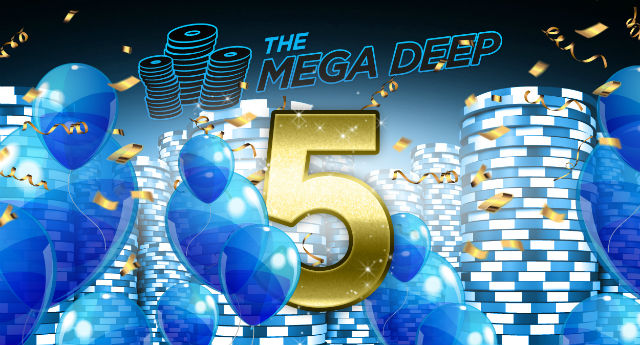 On Sunday, November 27, 888poker will celebrate the fifth anniversary of its popular Mega Deep tournament. To mark the special occasion, the site is boosting the event’s normal guarantee nearly fivefold to an impressive $500,000.

The inaugural Mega Deep launched in January 2012, and started out as something of a well-kept secret amongst poker pros who frequented the event. Eventually, the $215 buy-in tournament attracted a mainstream following, and would soon become a leading weekly event.

For the upcoming fifth anniversary tournament, the site has made a few notable changes. Aside from the increased prize pool, 888 will lower the length of blind levels from 30 to 20 minutes, while also allowing for one re-entry.

The special Mega Deep event comes on the heels of the site’s Super XL Series VI, which played out in September and featured $4 million in guaranteed cash. That series is also quite popular with the poker community, and has seen continual yearly increases in its prize pool.

A Favorite Amongst Pros

Several 888 poker pros and ambassadors will be on hand for the Mega Deep celebration, including accomplished tournament specialist Chris Moorman. The British grinder, who boasts $4.4 million in all-time winnings, has played in countless events, but still considers the Mega Deep to be one of his favorites.

Is Bitcoin Part of the Future of Poker?

“With the amazing structure allowing for great flexibility of play, the Mega Deep has always been one of my favorite tournaments of the week,” said Moorman. “Upping the prize pool to half a million dollars makes this a must-play for any aspiring or professional poker player.”

Poker pro Jonathan ‘jgjg3000’ Gill, who once made three Mega Deep final tables in a period of six weeks, will also be in attendance.

“I will certainly be looking to play this event,” said Gill. “The Mega Deep is a special tournament. Realistically it is what I believe to be the best structured MTT across all major sites, which I believe is partly the reason for my success in it. Weekly it attracts many players, whether online regulars or recs who have satellited in. It is hard to find a better weekly tournament.”

The Mega Deep also regularly draws some of the biggest names in the industry. Poker pros Felipe ‘mr.salgado’ Salgado, Peter ‘joeychestnut’ Murphy, and Marcelo ‘CHELitw’ Garcia Gonzalez are amongst the event’s past winners.

The exclusive tournament is just a part of 888’s strategy to woo customers with creative promos and special events. In January, the site will kick off its second 888Live Festival, inviting players to Rozvadov, Czech Republic for what is sure to be a one-of-a-kind experience. The 10-day event will take place at the biggest poker room in Europe, King’s Casino Rozvadov, and feature a €600,000 prize pool.