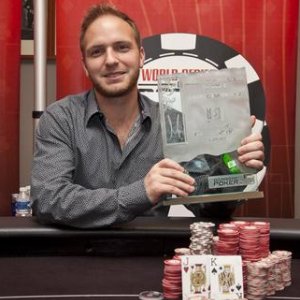 The month of May is shaping up to be a solid one for Canadian grinder Mike SirWattsWatson (pictured). After finishing second in the EPT Grand Final Monte Carlo, the tournament specialist has captured not one, but two first place prizes in the ongoing PokerStars Spring Championship of Online Poker.

SirWatts started the final table fourth in chips with 1.2 million, with FatmanScoopsholding the lead with 2.9 million. First-out was TherookieQQ9, who started with just a 342,000-chip stack, followed by DOCTORB911. Zinobrinhowas the next to go, with FatmanScoops then taking third place. That left Watson, who had amassed a huge chip lead of 7.8 million, to go head-to-head with MrSmits, who was backed by a 1.2 million stack.

In the final hand, Watson check-raised his opponent all-in on the flop, which MrSmits called. MrSmits turned a gutshot, which failed to come through on the river and left him with just a pair of sixes against Watson’s two pair. With that, Watson claimed victory and banked the $43,776 first place prize.

But he wasn’t finished there. Just three days later, Watson once again found himself at a final table, this time in a $2,100 buy-in Pot Limit Omaha Hi/Lo event. The field consisted of 142 runners, which was considerably smaller than what he faced during his first SCOOP win, but was stocked with some of the game’s toughest players. 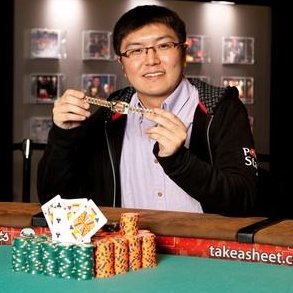 Going into heads-up play, Watson found himself with a 538,000-chip lead against Naoya “nkeyno” Kihara‘s 171,000 stack. The final hand saw Watson raise the button and then call Kihara’s re-raise all-in. The flop gave Watson a jack-high straight and leave his opponent with just a pair of nines. The turn gave nkeyno (pictured) two pair and a little hope to making a full house, but the jack on the river sealed the deal for Watson, who took first place and the $65,320 top prize.

Watson is a force to be reckoned with in the poker world, with his total live earnings topping $8 million. His biggest cash came in a tournament at the World Series of Poker Europe in Cannes, France, where he scored a first place prize of $1.3 million.

He also highlighted the variance that comes with being a tournament pro and how he only makes the money in just a small percentage of the events that he plays. “You fail so much more, even if you’re really good and you’re making money at 20% of the tournaments you play,” he said. “And of those, the majority are only giving back two or three times your buy-in.”