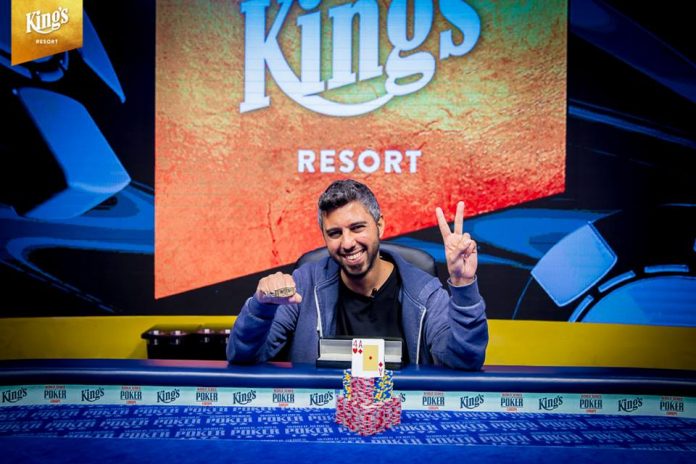 Asi Moshe is no stranger to the World Series of Poker winner’s circle, and on Tuesday he joined the ranks of two-time WSOP bracelet winners when he captured his second piece of gold in WSOP Europe’s Event #2: €1,650 No-Limit Hold’em 6-Handed Deepstack. Moshe topped a field of 221 entries to earn the €82,280 top prize.

Moshe entered the final table with the chip lead and rode that lead to victory. The Israeli player now has more than $2.15 million in live tournament earnings. Moshe’s first WSOP bracelet came at the 2014 WSOP in Las Vegas, when he topped a field of 2,396 entries in a $1,500 no-limit hold’em tournament to win $582,321.

Moshe started off the final table winning the first pot and never looked back. He busted Viktor Katzenberger in sixth place and sent Van Tiep Nguyen home in fifth place before James Bullimore stepped in to knock out Giuliano Bendinelli in fourth place.

During three-handed play, the three stacks pulled close to even before Moshe stepped on the gas once again to widen the gap. He then knocked out Bullimore in third place with the

hit the turn. After Moshe checked, Bullimore bet 525,000. Moshe called and the dealer delivered the

on the river. Moshe moved all in with his flush and Bullimore found a call with a lesser straight to bust in third.

Busting Bullimore gave Moshe around 75% of the chips in play entering heads-up action against Robert Schulz. Schulz tried to fight back, but in the end, Moshe proved too strong an opponent. Schulz did land a couple of double ups, but nothing that could really dent Moshe’s stack as they came after Moshe had cut him down even more.

On the final hand, Moshe moved all in from the button with the

. Schulz called off his last 12 big blinds with the

. The flop, turn, and river came